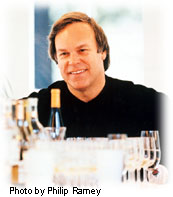 Robert M. Parker, Jr., the world’s foremost wine guru, makes 12 bold predictions about seismic changes that will influence how we’ll shop, what we’ll buy and how much we’ll pay

Predictions are often carelessly thrown together lists, since few people remember them 10 years later. Who is going to call the author after a decade and complain about his boneheaded observations? Still, I confess to having given the following 12 predictions considerable thought. Moreover, I am confident that they will come true sooner rather than later.

1 Distribution will be revolutionized
I predict the total collapse of the convoluted three-tiered system of wine distribution in the United States. The current process, a legacy of Prohibition, mandates that all foreign wines must be brought into the country by an importer, who sells them to a wholesaler, who sells them again to a retailer. Most U.S. wineries sell to a distributor, who in turn sells the wines to a retailer. It is an absurdly inefficient system that costs the consumer big bucks. This narrowly restricted approach (blame all the lobbyists funded by powerful liquor and wine wholesalers) is coming to a dramatic end—hastened in part by the comparative ease of ordering wine over the Internet. Differing federal court opinions over the last decade have insured that eventually the Supreme Court will have to rule on whether wineries can sell directly to whomever they wish, whether it is a wholesaler, retailer or consumer. Imagine, if you can, a great Bordeaux château, a tiny estate in Piedmont or a small, artisanal winery in California selling 100 percent of its production directly to restaurants, retailers and consumers. I believe it will be possible by 2015.

3 World bidding wars will begin for top wines
Competition for the world’s greatest wines will increase exponentially: The most limited production wines will become even more expensive and more difficult to obtain. The burgeoning interest in fine wine in Asia, South America, Central and Eastern Europe and Russia will make things even worse. There will be bidding wars at auctions for the few cases of highly praised, limited production wines. No matter how high prices appear today for wines from the most hallowed vineyards, they represent only a fraction of what these wines will fetch in a decade. Americans may scream bloody murder when looking at the future prices for the 2003 first growth Bordeaux (an average of $4,000 a case), but if my instincts are correct, 10 years from now a great vintage of these first growths will cost over $10,000 a case…at the minimum. It is simple: The quantity of these great wines is finite, and the demand for them will become at least 10 times greater.

4 France will feel a squeeze
The globalization of wine will mean many things, most of it bad news for the country historically known for producing the world’s greatest wines: France. The French caste system will become even more stratified; the top five percent of the estates will turn out the most compelling wines and receive increasingly astronomical prices for them. However, France’s obsession with tradition and maintaining the status quo will result in the bankruptcy and collapse of many producers who refuse to recognize the competitive nature of the global wine market.

5 Corks will come out
I believe wines bottled with corks will be in the minority by 2015. The cork industry has not invested in techniques that will prevent “corked” wines afflicted with the musty, moldy, wet-basement smell that ruins up to 15 percent of all wine bottles. The consequences of this laissez-faire attitude will be dramatic. More and more state-of-the-art wineries are moving to screw caps for wines that need to be consumed within 3 to 4 years of the vintage (about 95 percent of the world’s wines). Look for this trend to accelerate. Stelvin, the screw cap of choice, will become the standard for the majority of the world’s wines. The one exception will be great wines meant to age for 20 to 30 years that will still be primarily cork finished—although even the makers of these wines may experience consumer backlash if the cork industry does not solve the problem of defective corks. Synthetic corks, by the way, are not the solution. They do not work and can’t compete with the Stelvin screw caps.

6 Spain will be the star
Look for Spain to continue to soar. Today it is emerging as a leader in wine quality and creativity, combining the finest characteristics of tradition with a modern and progressive winemaking philosophy. Spain, just coming out of a long period of cooperative winemaking that valued quantity over quality, has begun to recognize that it possesses many old-vine vineyards with almost unlimited potential. Spanish wineries recognize that they are trapped neither by history nor by the need to maintain the status quo that currently frustrates and inhibits so many French producers. By 2015, those areas that have traditionally produced Spain’s finest wines (Ribera del Duero and Rioja) will have assumed second place behind such up-and-coming regions as Toro, Jumilla and Priorat.

7 Malbec will make it big
By the year 2015, the greatness of Argentinean wines made from the Malbec grape will be understood as a given. This French varietal, which failed so miserably on its home soil in Bordeaux, has reached startling heights of quality in Argentina. Both inexpensive, delicious Malbecs and majestic, profoundly complex ones from high-elevation vineyards are already being produced, and by 2015 this long-ignored grape’s place in the pantheon of noble wines will be guaranteed.

8 California’s Central Coast will rule America
Look for wines from California’s Central Coast (an enormous region that runs from Contra Costa down to Santa Barbara) to take their place alongside the hallowed bottlings of Napa and Sonoma valleys. No viticultural region in America has demonstrated as much progress in quality and potential for greatness as the Central Coast, with its Rhône varietals, and the Santa Barbara region, where the Burgundian varietals Chardonnay and Pinot Noir are planted in its cooler climates.

9 Southern Italy will ascend
While few consumers will be able to afford Piedmont’s profound Barolos and Barbarescos (which will be subject to fanatical worldwide demand 10 times what we see today), once-backwater Italian viticultural areas such as Umbria, Campania, Basilicata and the islands of Sicily and Sardinia will become household names by 2015. The winemaking revolution currently under way in Italy will continue, and its rewards will become increasingly apparent over the next decade.

10 Unoaked wine will find a wider audience
Given the increasingly diverse style of foods we eat as well as the abundant array of tastes on our plates, there will be more and more wines that offer strikingly pure bouquets and flavors unmarked by wood aging. Crisp, lively whites and fruity, savory and sensual reds will be in greater demand in 2015 than they are in 2004. Wood will still have importance for the greatest varietals as well as for wines that benefit from aging, but those wines will make up only a tiny part of the market.

11 Value will be valued
Despite my doom-and-gloom prediction about the prohibitive cost of the world’s greatest wines, there will be more high-quality, low-priced wines than ever before. This trend will be led primarily by European countries, although Australia will still play a huge role. Australia has perfected industrial farming: No other country appears capable of producing an $8 wine as well as it does. However, too many of those wines are simple, fruity and somewhat soulless. Australia will need to improve its game and create accessible wines with more character and interest to compete in the world market 10 years from now.

12 Diversity will be the word
By 2015 the world of wine will have grown even more diverse. We will see quality wines from unexpected places like Bulgaria, Romania, Russia, Mexico, China, Japan, Lebanon, Turkey and perhaps even India. But I believe that even with all these new producers, the saturation point will not be reached, since ever greater numbers of the world’s population will demand wine as their alcoholic drink of choice.

This article originally appeared in October 2004 (Food and Wine Magazine)